Harkening back to the glory days of gothic romance that had us up reading all night, HorrorAddicts.net Press Presents:

13 stories of horror, romance, and that perfect moment when the two worlds collide. Vengeful spirits attacking the living, undead lovers revealing their true nature, and supernatural monsters seeking love, await you. Pull the blinds closed, light your candle, and cuddle up in your reading nook for some chilling—and romantic—tales.

An excerpt from Haunts & Hellions

Off the Coast of Australia, aboard ship

“Miss Smith! Miss Smith, my word! Would you slow down, girl?” Mrs. Linden called after her as she entered the corridor.

“What is it?” Vivienne paused, taking in Mrs. Linden’s flushed cheeks and heavy intake of breath.

“Such news!” Mrs. Linden took hold of her forearm, holding a little tighter than she would like as the older woman led her to a couple of chairs by the window. “Haven’t you heard? The most dreadful thing!”

“Seven more passengers are ill. Seven! And all from the upper-class cabins.”

“No!” Vivienne covered her mouth as she felt faint. How could an illness spread so fast?

“The young Dr. Radley has been called in to service as even the ship doctor himself has been feeling under the weather.”

“But are you sure? Seven? Seven overnight? Surely that must include the maid and…”

“No, I’m afraid not, sweet girl. It is on top of. There are now five passed on and…oh!” Mrs. Linden pressed her handkerchief to her mouth, her watery eyes speaking of fear and uncertainty. “I must go… I’ve only come to tell you, my husband and I will be dining in our cabin for the remainder of the trip. We’ll be leaving as soon as we come to port and booking passage elsewhere. I advise you to do the same.”

“Yes, that is wise. Thank you for telling me.” Vivienne helped the lady from her chair and took her side to walk her back.

“No, now, you must return to your room. I won’t have you sick because of me. Fare thee well, young Miss.” Mrs. Linden waved her hanky to her as she passed and hurried down the corridor as quickly as her little stubby legs could take her.

Vivienne’s heart thudded hard in her chest. What could she do? Should she see Charles? Was there a cure?

Noticing some commotion out on deck, she peeked out and saw several crewmen lifting a large flat object, covered in dark cloth, up on the railing. It almost looked like a…body. The captain was up above them on the steps, crossing himself.

“Heave…ho!” the crewmen called and the form slid from the flat plank of wood, into the water below with a splash.

As the crewmen pulled yet another body onto the wooden slab, one of the shipmates saw her.

“Oh, now this isn’t the place for a lady. Please go back inside, Miss.” His words melted into nothingness as she locked eyes with the captain and saw the shame and disgust in his eyes.

“Miss Smith!” She turned to see Dr. Radley without a jacket and his shirt-sleeves rolled up. His eyes held concern and he came to her side, gently touching her on the elbow.

“I think you should be in your room.”

Charles gently grasped her arm and led her away from the most disturbing thing she’d witnessed in her young life. He held her as she wilted into him and led her down the hall to her cabin.

Once seated inside her stateroom, Charles fetched her a cool glass of water and stood against the doorframe, studying her. After a period of silence, she looked up at him.

“Charles… Mr. Smithe, he….” She touched again the place where he’d placed a kiss.

“What did he do to you? Are you alright?”

“I see.” Relief washed over his face. He retrieved a washcloth and brought out a small vial from his pocket, dabbing the cloth. “I’m sorry, but you won’t have to worry about him anymore. He is… Well, he’s sure to be laid up the rest of the trip.” He smoothed the cloth over her cheek and the smell of rubbing alcohol caused her nose to tingle.

“No.” He shook his head, brushing back her hair and looking into her eyes. “The chances of that are…and besides, I’ve just disinfected you.”

She smiled weakly, hoping he was right.

“How many?” she asked. Mrs. Linden had said seven, but the bodies coming out of the hall seemed in the dozens and she wondered if there were more to come.

“Twenty… Why are they being dumped into the sea? Won’t their families want to—”

“The captain doesn’t want to take the chance. With how quickly it spread, he fears… He wants to protect the other passengers.”

“Who…were they? Anyone I…” She gulped back tears. Having not been on the boat long, she didn’t particularly have feelings for any of her shipmates especially, but she still didn’t want to see them die.

“Mostly below deck crew.” Charles kneeled before her and took her hand in his. “Try not to worry, Vivienne. You are safe here in your room.” He leaned in and she could not help but touch her lips to his. They kissed and she felt so safe in those moments.

“I should get back.” He stood, kissing her once more before taking his leave.

“Charles…” she called as he opened her door.

“Will you come back this evening?”

To read more, read Haunts and Hellions at: Amazon.com

It’s MY Northanger Abbey, not yours!

Ever feel such a connection to one of Jane’s books that you’re possessive? Yeah, me too. You see, Northanger Abbey is my favorite and no one will ever love it as much as I do. Think I’m wrong? Well, let’s see, shall we?

I belong to who? Emmy? Never heard of her.

How did you become JA fan?

For me, I arrived late to the party. Having never read the books in school, it wasn’t until I was in my twenties and a friend of mine showed me Bridget Jones Diary. I didn’t really get it. Sure, Firth was cute, but I didn’t really understand until I watch the BBC version of Pride and Prejudice. Then, the fever took hold.

After I watched, I had to read it and there opened the world of Jane Austen to me. First Pride and Prejudice then Emma, Mansfield Park, the list goes on. It wasn’t until I reach Northanger Abbey that I found my favorite.

Now, most people don’t recommend NA because it’s not a favorite of a lot of people. In fact, being her first novel written, some people even snub it. But for me, it sums up my life completely.

I’ve always lived my life in books and stories whether I created them or I read other author’s work. Northanger Abbey spoke to me more than just another story to escape to.

First, I’m a horror addict, so Catherine’s story appeals to me because she is a horror enthusiast. She is like me and my friends. She’s one of us, imagining our lives are gothic tales where the big bad is around every corner.

Second, Northanger read surprisingly like something I had written myself. The first novel I ever wrote when I was ten. I wasn’t going to be a novelist—my dream was to be a singer—but I had this fabulous idea that everyone would want to read my work too. Fifty-six pages of big, bubbly, pencil writing later, I had my masterpiece. A tale about a teen actress who lives her life in a fantasy where she is the star of every situation. She encounters horrors (her plane to Paris being hijacked by a terrorist group) and deals with them as if she is an action star despite her being young and having never handled a gun before. But it isn’t that I feel I am so great having written something very like Jane. It’s more, because I had penned something similar, it made me feel closer to the writer herself. She was once like me. We both lived in minister households and had to find some way to escape the restricted and unvarying life we had. 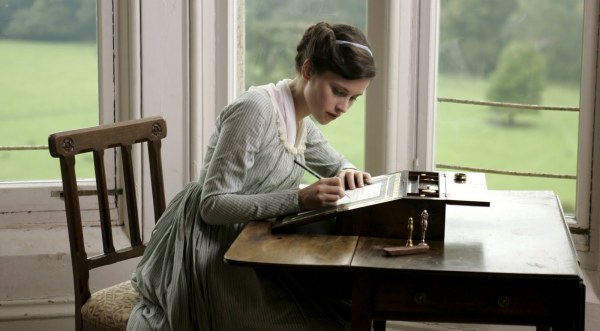 Northanger Abbey features a young girl caught up in fantasy who learns through a series of events that you can’t live your entire life in a novel. And if you did it wouldn’t be that great of a life anyway. While my novel involved teen actors in the modern world, my lead player was like Catherine Morland. Young, unaware of the real world and living her life like the pages of a book where she found everything more excited when wrapped in a gothic world view.

Now, mine was not a piece of art like Jane’s is. In fact, I’ve been repeatedly made fun of from a certain quote, “They went to the most expensive stores like K-mart and Target.”  However, I found a connection to Jane through it. Not because we’re both writers, but because we were both young women with overactive imaginations and through the story, are almost chastising ourselves for our wild ideas. If you study both of our first novels—and no, mine will never be in print lol—you’ll find our fears when growing up. We lived in novels most of the time and our imaginations were always getting us in trouble. We were disinterested in the real world and by writing this storyline, we were advising ourselves (although I didn’t realize it then and she probably didn’t either) that we couldn’t always live in fictional worlds, while at the same time enjoying every minute of it.

What is your favorite Jane Austen novel and is there a reason that it connects with you so intimately?  I’d love to hear about it. Please comment below.